Update: for more on Fyfeshire's history, see our blog post History comes to life at Fyfeshire.

History of the Fyfeshire Conservation Area

The site where the Fyfeshire Pond Dam is located is listed with the Massachusetts Historical Commission.  It is not known exactly when the dam was built, but according to Fuss & O'Neill's 2009 report (big pdf file--be patient), "the similarity of the fill and the underlying material to a depth of 19 feet is consistent with the method of dam construction 100 years ago, where fill material was generally excavated from the surrounding area."

In the 1800s one hundred acres of land on Wattaquadock Hill Rd. were given to William Fyfe and Mary Josephine Butler as a wedding gift by Mary's father.  William was one of two brothers who emigrated from Fyfeshire, Scotland.  He became a successful farmer, selling his produce in Boston with the Kennedy Product Company.

William and Mary Josephine built a house which stands today at the corner of Ballville and Wattaquadock Hill in Bolton.  The Fyfe family owned and lived in the Fyfe Homestead for three generations--the Tripps live there now, at 505 Wattaquadock Hill Rd.  This area had a thriving village.  The ponds provided waterpower, and William rented a button and  comb-making mill to McNeal, Plummer and Co. in 1878.  It burned in 1880 and was never rebuilt--its foundation can be seen to the right of the bridge over the small pond in the conservation area.

A business card from the McNeal, Plummer & Co. button shop. 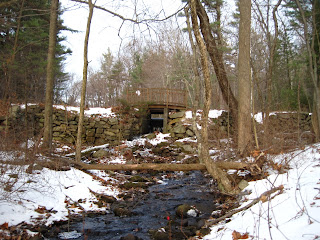 Downstream view of the button shop foundation to the left of restored small dam (not the one being removed) on the small pond.


William expanded his expertise into real estate and moved his family to Clinton to a house on Water Street.

In 1899, William Fyfe and his adult daughter, Dora Josephine, were driving their buggy home to Clinton and were struck and killed by a train that had its first and only run through Bolton.  Dora Josephine's husband and her mother, Mary Josephine, were left to raise the three children--Helen, Josephine and George.  The oldest child, Helen Plummer (1888-1977), the granddaughter of William and Mary Josephine Fyfe, never married and served as an art teacher in the Clinton school system.  Helen built a cabin on the upper (smaller) pond.  The cobblestone gateway at the entrance to the area remains from her summer cottage property. The Clinton Fish and Game held their annual clambakes and fishing derbies on the property for many years.  The cabin has since burned down. 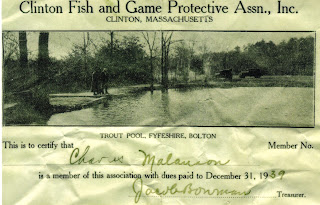 A 1939 membership card to the Clinton Fish and Game showing the smaller pond at Fyfeshire Conservation Area. (They called it "Trout Pool" because they stocked it with trout.)

Helen Plummer donated the remaining thirty acres to the town of Bolton in 1969 and asked that it be kept in conservation because it was a special place that the family loved and they wanted other people to enjoy it as well.

Helen Plummer died in 1977 and is buried in West Cemetery, Bolton, along with the rest of the family.


Please help us save this historic site and ponds.

Personal Communications with member of the Bolton Historical Society