Looking for a few good witches and wizards

We are hosting a Harry Potter Witches and Wizards Walk on Saturday, Oct. 15 from 2:00 - 4:00 at Fyfeshire Conservation Area.   Walkers will have the chance to win points for their houses by doing stuff as they stroll through the conservation area.

We could use the following kinds of helpers--a butterbeer for your efforts plus Community Service Credit for Nashoba High School students.  Knowledge of Harry Potter helpful, but not required.  Just come by Fyfeshire around noon on Saturday, and we'll fill you in on how you can help.  For example, we could use

Plus lots more--let us know your favorite character, we'll find a role for you!

Send email to fyfeshire@yahoo.com and let us know what you can do.

Why are we doing this?  We think the ponds are worth saving and want to get folks out to see them for themselves. No admission, but donations gratefully accepted toward saving the ponds.


Posted by a Fyfeshire neighbor at 5:01 PM No comments:

Save the Ponds Night Filled the Roadhouse!

Many thanks to everyone who turned out for the Save the Ponds night at the Bolton Roadhouse on Wednesday night.  The place was hopping--every table and the bar were filled and at one point people were coming in so fast, there was a wait for a table.  But the crowd was patient, and everyone had a pleasant meal as they contributed toward saving the ponds at Fyfeshire Conservation Area.

Congratulations to Dave Wylie who won the 50-50 raffle.  But don't be too quick to have a drink on his tab--Dave graciously donated his winnings back to the cause.

Many thanks to everyone at the Bolton Roadhouse for hosting the event and helping us to raise some money toward saving the ponds!
Posted by a Fyfeshire neighbor at 10:11 PM No comments:

Eat to save the ponds!

The Bolton Roadhouse is hosting a Save the Ponds night--print out and bring the coupon below with you and the Roadhouse will donate 20% of the price of your meal towards saving the ponds.

The Group for the Preservation of Fyfeshire Ponds is trying to save the ponds in the Fyfeshire Conservation Area. We are raising money toward repairing the dam.   For more, see The Issue page.

Please send us an email telling us how many are planning to attend--the Roadhouse would like to know how many to expect, for planning purposes.  Or call Lee at 978-365-3245.

Click on the coupon below to open a separate page with a larger-sized coupon for printing: 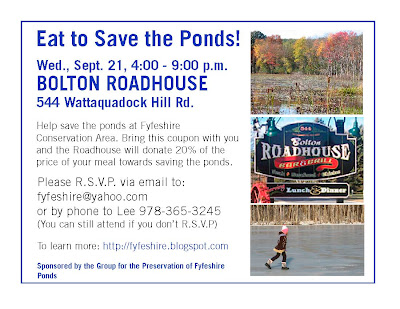 Posted by a Fyfeshire neighbor at 3:42 PM No comments:

One week after Hurricane Irene, we are happy to report: Nothing

Although downed trees and power outages plagued Bolton following Hurricane Irene last week, it looks like Fyfeshire Conservation Area, the ponds and the dams made it through unscathed.  When I walked around the area the morning after the storm (nothing else to do--can't shower, can't make coffee without electricity...) there were no large trees in the paths, no visible damage to the dam, and minimal flooding, although the waters were certainly more forceful than before the storm.  Just a lot of leaves and small branches strewn about.  Even the piles of brush we had dragged out to the road on community service day to haul away remained intact.

I took a few video clips of the dam before and after the storm.

Here is a video taken on August 27, the day before the storm. Not​ice how no water is coming through the pipe or spilling over the rocks, and the brook below the dam is just a very gentle gurgle.